At its final meeting of the academic year last week, Stanford’s Board of Trustees approved the university’s 2019-20 budget plan, discussed next steps for the long-range vision and received an update on the university’s application for a General Use Permit, Board Chair Jeffrey S. Raikes reported.

A highlight of the two-day meeting, Raikes said, was a presentation on Ethics, Society & Technology, one of the programmatic activities of the university’s long-range vision. The board also honored departing member Ron Spogli.

During the meeting, trustees approved Stanford’s consolidated $6.8 billion budget for 2019-20. Raikes said the budget had two overarching priorities: to take care of the university community and to invest in a strong foundation for the future, aligned with the priorities of the long-range vision. 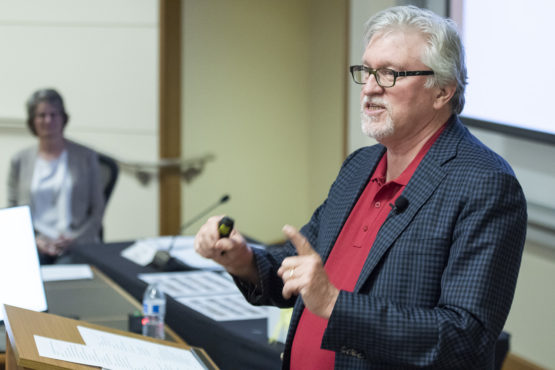 Jeff Raikes, chairman of the Board of Trustees. (Image credit: L.A. Cicero)

The general funds budget, a subset of the consolidated budget, is $1.6 billion for 2019-20. General funds are not tied to specific uses and are available to support university operations broadly.

Raikes said that the key priorities for the general funds were largely tied to efforts taken by the university to address affordability. Some highlights of general funds allocations include:

Raikes also said that more than half of the capital budget is devoted to housing, including the completion of Escondido Village graduate student housing.

Stanford President Marc Tessier-Lavigne updated the board on the long-range vision for the university, which he had presented to the Academic Council on May 23.

The vision is organized around three strategic themes: Advancing and Bridging Disciplines, Building Pathways to Impact, and Strengthening Communities on Campus and Beyond. Ten specific programmatic efforts are nested within these three themes.

Raikes said that an overarching theme of the vision is to achieve breakthroughs in research and learning by both strengthening and connecting existing structures. “It’s not a one-size-fits-all, but rather a variety of organizational models, that will help to advance the initiatives,” he said.

The long-range plan is moving into a pilot period in which the programmatic activities will be given some seed funding to begin their work and to identify funding strategies.

“The trustees came away with the sense that it’s a very compelling vision for Stanford’s future,” Raikes said. “It’s focused in on the academic opportunities before us, but I think also the opportunities for us to contribute to the world in greater and more significant ways and, at the same time, support the members of our community.”

At each board meeting this academic year, the trustees have been hearing about one or more of the initiatives within the three strategic themes of the long-range vision. The June 12-13 meeting featured a presentation from the co-chairs of the Ethics, Society & Technology effort: Margaret Levi, professor of political science and director of the Center for Advanced Study in the Behavioral Sciences, and Rob Reich, professor of political science and co-chair of the Ethics in Society program.

Raikes said that the purpose of this effort is to embed ethical considerations and societal implications into Stanford’s teaching and research in science and technology. He noted that there is already a substantial amount of work being done at the university in this area. The intention of this initiative is to approach the issue in a coordinated way, bringing together all the work across the campus into a flexible “hub” that would help coordinate activities, provide additional resources and create a governance structure.

Raikes expressed enthusiasm for the initiative. “If you look around and see all the issues we’re facing, it’s quite timely, and I think it’s where Stanford brings its distinctive strengths,” he said.

Update on General Use Permit

Trustees also heard an update on the university’s application for a new General Use Permit with Santa Clara County. The proposed long-term permit would authorize development of Stanford’s academic facilities and housing over the next roughly two decades. Raikes said that the application is currently before the Santa Clara County Planning Commission. After review there, it will go to the Board of Supervisors for hearings beginning in the fall.

“This is a very important process for Stanford’s future … and for how Stanford contributes to the world through its teaching and research,” Raikes said.

Raikes said that because of the Bay Area’s affordability challenges, the university recognizes the need for additional housing, and Stanford is proposing to more than double – from 550 to 1,300 – the number of workforce housing units in the original application.

Combined with other measures the university is already taking, this will allow Stanford to meet the workforce housing demand to be created by the academic space development under the General Use Permit.

He said that Stanford is still seeking a development agreement with the county. This is a voluntary contract in which Stanford offers the broader community additional benefits – beyond those covered in the General Use Permit – in exchange for the agreement that the university would be able to complete its long-term development.

Raikes called the General Use Permit and the long-range vision the “the most important issues” of his tenure on the board. “These two strategic initiatives will shape this university for the next couple of decades,” he said.

The trustees honored board member Ron Spogli, who is departing after 10 years of service on the board. A Stanford alumnus, Spogli founded a private equity firm, served as U.S. ambassador to Italy and is one of the names behind the Freeman Spogli Institute for International Studies at Stanford.

Raikes described Spogli as an “extremely dedicated, thoughtful and engaged” member of the board and a great “thought partner.”

“He really helped the university think in a global context,” Raikes said. “He has a deep understanding of how the international landscape is changing and he always brings that perspective to our discussions.”